Protecting Our Patients. Serving Our Members.

WANA | Washington Association of Nurse Anesthetists has promoted best practices in the field of anesthesia and provided members with exceptional training and career opportunities while elevating issues of critical concern to the delivery of healthcare in the state of Washington.

What is a CRNA?

Certified Registered Nurse Anesthetists (CRNAs) provide anesthesia in collaboration with surgeons, anesthesiologists, dentists, podiatrists and other qualified healthcare professionals. When anesthesia is administered by a nurse anesthetist, it is recognized as the practice of nursing; when administered by an anesthesiologist, it is recognized as the practice of medicine. Regardless of whether their educational background is in nursing or medicine, all anesthesia professionals give anesthesia the same way.

As advanced practice nurses, CRNAs practice with a high degree of autonomy and professional respect. They carry a heavy load of responsibility and are compensated accordingly.

Where do CRNAs practice?

How to become a CRNA

How long have CRNAs been around?

Nurse anesthetists have been the main providers of anesthesia care to U.S. military men and women on the front lines since WWI, including current conflicts in the Middle East. Nurses first provided anesthesia to wounded soldiers during the Civil War.

The Continued Professional Certification (CPC) Program, which replaced the former recertification program, focuses on lifelong learning and is based on eight-year periods comprised of two four-year cycles. Each four-year cycle has a set of components that include:

The CPC Assessment component is only required in the second 4-year cycle and can be taken during any testing windows in that second cycle. For complete information on all components of the CPC Program, click the button below.

What is the history of WANA?

In the Spring of 1936, Spokane hospital representatives Elizabeth Scully, June Roberts, Alice Claude and Mary Leonard met at a luncheon in the Davenport Hotel. Their purpose was to form plans for the creation of an association for Nurse Anesthetists.

A few short years later, on 20 February 1939, the Washington Association of Nurse Anesthetists (WANA) was organized. Their first meeting occurred at the Davenport Hotel in May 1940.

June Roberts was a charter member and first president of WANA. Her primary interest was to promote and encourage nurse anesthetist education. During her time as president of WANA, she increased anesthetist enrollment from two students per year to fourteen. June’s enthusiasm and assiduous efforts in the school of anesthesia was responsible for obtaining full accreditation from the American Association of Nurse Anesthetists in 1953. The following year, she retired after three decades as Director of Anesthesia at Sacred Heart Hospital in Spokane. 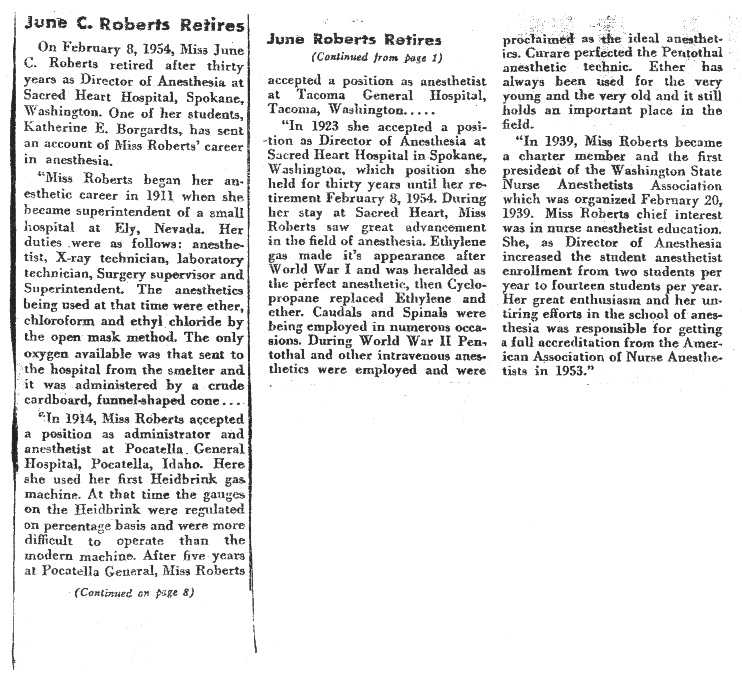 CRNAs provide anesthesia in all settings: Hospital, Ambulatory Surgery Centers, Offices and Pain Clinics.
CRNAs administer anesthesia at 67% of all Hospitals.
CRNAs administer anesthesia at 93% of all Rural Hospitals.
CRNAs are the only anesthesia providers at 72% of all Rural Hospitals.
Providence Sacred Heart Medical Center/Gonzaga University Nurse Anesthesia Program in Spokane, WA is one of over nationally 100 accredited schools.
CRNAs are the sole anesthesia providers at 70 percent of rural hospitals in the state of Washington.aIn 2003, Governor Locke signed the CMS Opt Out authorizing CRNA independent practice without physician supervision.
Previous
Next

CRNAs at a Glance

Nurse anesthetists have been providing anesthesia care to patients in the United States for more than 150 years. The CRNA credential came into existence in 1956 and, in 1986, CRNAs became the first nursing specialty accorded direct reimbursement rights from Medicare.

CRNAs are anesthesia professionals who safely administer more than 50 million anesthetics to patients each year in the United States.

CRNAs represent more than 80% of the anesthesia providers in rural counties. Many rural hospitals are critical access hospitals, which often rely on independently practicing CRNAs for anesthesia care. Half of U.S. rural hospitals use a CRNA-only model for obstetric care, and CRNAs safely deliver pain management care, particularly where there are no physician providers available, saving patients long drives of 75 miles or more.

Numerous peer-reviewed studies have shown that CRNAs are safe, high quality and cost-effective anesthesia professionals who should practice to the full extent of their education and abilities.

As advanced practice registered nurses, CRNAs practice with a high degree of autonomy and professional respect. CRNAs are qualified to make independent judgments regarding all aspects of anesthesia care based on their education, licensure, and certification.

Nurses first provided anesthesia on the battlefields of the American Civil War. During World War I, nurse anesthetists became the predominant providers of anesthesia care to wounded soldiers on the front lines. Today, CRNAs have full practice authority in every branch of the military.

The CRNA model, where anesthesia delivery is staffed and directed by CRNAs avoids duplication of services, promotes efficient utilization of anesthesia providers, and reduces cost.

Legislation passed by Congress in 1986 made nurse anesthetists the first nursing specialty to be accorded direct reimbursement rights under the Medicare program and CRNAs have billed Medicare directly for 100% of the physician fee schedule amount for services.

In 2001, CMS changed the federal physician supervision rule for nurse anesthetists to allow state governors to opt-out of this facility reimbursement requirement.

To date, 19 states and Guam have opted out of the federal physician supervision requirement.

Looking To Get Involved?

Advance the Profession of Nurse Anesthesia and support CRNAs in Washington as they make an impact on patients and healthcare.

Donate To Our PAC